The 1st single from Malou Beauvoir’s eclectic upcoming new album is a cover of Steve Winwood and Will Jennings’s incredible 1986 song « HIGHER LOVE ».
Jennings described the song as a « modern hymn » with a spiritual influence from his Arkansas childhood upbringing.


KAMOKEN & Malou Beauvoir decided to record the song in an effort to sensitize the Caribbean –American voters to the importance of voting in this upcoming election.
Beauvoir says, “As I sat through confinement in NY during the COVID pandemic, I listened to the politicians’ responses to the pandemic and witnessed the impact on all communities. I watched as Trump’s messages strove to divide Americans and fuel the flames for racism in the U.S. and internationally, blindly blaming the Chinese, and other countries for his mismanagement of the crisis. I realized then that GREED, bullying and money had become the main political platform in America…and that the only way to hope to change this broken system was to get every last person out there voting.
One evening, I turned on the radio and heard « HIGHER LOVE » …I realized that I wanted more than anything to “do my part” and to help remind people that we need to look higher…and deeper within ourselves. We must strive to protect the values and ideals that America once represented. We need to nourish our minds and hearts with hope and realize that we can come back from this difficult period, but only if we are ALL willing to join hands and work to make our dreams a reality. I believe in America and in the goodness and resilience of our people.

As I listened to the song, I realized that I couldn’t find a better way to put those thoughts across than with Winwood and Jennings song…if I could only find a way to do it justice. So I teamed up with Haitian producers (KAMOKEN) Chico Boyer and Cheff Loncher, and said, \"We have to get every Haitian American out in the polls and voting!\"

With their experience and commitment to the Caribbean and Latin community, together we created a new version of HIGHER LOVE, reflecting what we each thought would touch voters the most. I wanted to highlight the lyrics and soul of the song, Cheff wanted to keep it fresh and light. Chico wanted the Haitian rhythms. With the participation of ALAN CAVE who chimed in with the ending Haitian chorus, and LAISSA BOYER on background vocals and YAYOI IKAWA on keyboards, we made our version!
All of us are “KAMOKEN” (which means « the Wild Maroon » or the “invincible one”), when we get out and make our VOTE count! 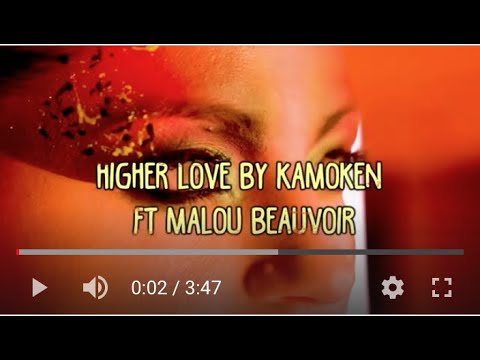